Today is world mental health day. Which is fitting, because it feels like my mental health has reached the Mariana Trench. I just feel numb. I feel blank. I feel like I’m just occupying space, taking up the free oxygen in this room. Yesterday seemed ok. I had fun last night. But I think the reality of the situation caught up with me today and I hit a wall.

Yesterday was Joey‘s birthday. It was the first birthday since he killed himself in April. We wanted to get people together and remember him. Of course, we went to Hooters. Which is totally where Joey would have wanted to go. I had a great time, we laughed, ate and drank too much. It was a nice time, despite the missing person at the table. Today, I’m looking through Facebook memories and I come across this post: 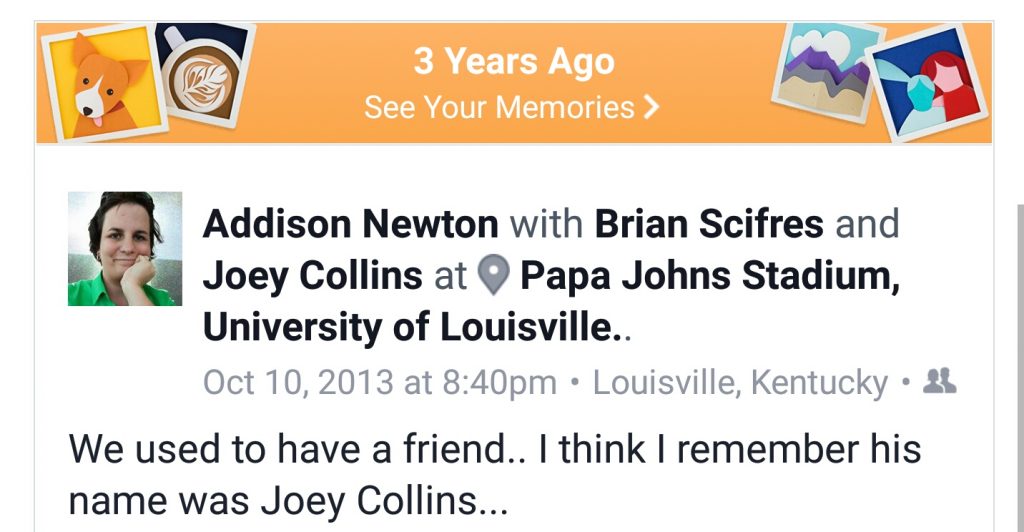 That one hit me right in the feels. It was one of those times where we couldn’t quite draw Joey out of the house. So I was trying to give him a little crap because, well, that’s what we did to each other.  Such is such and so and so and whatever..

Earlier in the day, Kayla and I had gone to a wedding. Megan was there as well, with the kids. It was supposed to be a happy occasion, but with it being so close to my divorce, it just sort of stung. It’s like, I’m glad that it’s over, because it drug on too long. However, at the same time, I’m still sad and angry that it had to be that way. While I love the new life that I’m building with Kayla, I still miss my family. I miss tucking Grayson in each night and saying the same old corny stuff we’ve been saying for years. I miss Hunter running around here like a madman, even if he has been a big grump for the last couple weeks. I have so much in front of me, but as is normal with me, I spend a lot of time dwelling on the past.  It’s what I do. My mind is basically just one huge flowchart where every stop is a “What if” question. It’s dumb.

Anyway, I sit at my desk and pretend to be chipper to my customers, lying that I’m doing great. Trying to not let my soul get any more dings in it than it already has. At this point, it looks like my old samurai. Rusty and not a undamaged surface to be found.

I keep thinking about the cocktail of medications that I take on a daily basis. I wonder which, if any, are helping me feel better. Or more likely, which are exacerbating the situation. Having also just changed dosage and method of delivery on my estrogen, I consider if that has anything to do with it.

I think I’ve said enough at this point. If I keep going, it’s just going to devolve into a drivel.

One thought on “empty.”