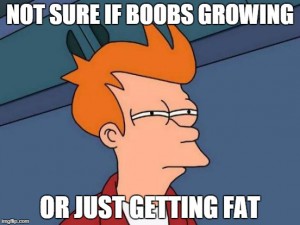 You should see my drafts folder. I have started so many entries and never finished them. Much like so many other things in my life.. I’m actually the worst at follow through and project completion.

Full Disclosure:  Between this paragraph and the last, I cleaned the fish tank, shaved my legs, picked out jamberry wraps with Megan and had a couple drinks.

Motivation is something that has been a recurring discussion with my therapist. That it.. I have none. I don’t know if there’s an answer to that, a solution to that problem? I’ve been doing it for all my life.

That said, there’s been a lot going on in my life in the last couple weeks. The largest and most important was the birth of my second child, Hunter. He was born on Tuesday the 19th of May at 13:37. Weighing in at 7lbs, 7oz with a height of 19 inches. He was born 3 weeks premature, but suffered no ill effects from this. Mom is doing well and is on the mend. Both are home, after a extended stay in the hospital.

Through the joy, I’ve also been wallowing in self-despair, self-loathing and general depression. The thought of how much I’m going to fuck these kids up over the years. The consideration that I will never be a real woman. Even in discussion with Megan, I referred to myself by the dirtiest of slurs in the transgender world.  Basically that I might never pass, I might always be the awkward shemale tranny weirdo.

I’ve cried more in the last 2 weeks than I have in the last 2 years and I think I can attribute most of that to the hormones. I’ve read about this side effect and I had sort of dismissed it because 2 months in, I had seen nothing of the sort. Of course, my first month was at a dosage so low, I could have gotten more estrogen drinking the tap water around these parts.. so I might just be seeing a slightly delayed reaction.

In any event, after that discussion with Megan, I slumped on the floor of Hunter’s bedroom and cried. Just worried that my children will be forever screwed up because their father is a woman. I really don’t want to admit this to anyone, but I think it’s important to put it out there. For a (very) brief moment, I thought being dead might be the better option. Suicidal ideation is not something foreign to me, I used to think about it all the time when I was a teenager. It’s something that crosses my mind from time to time over the years between puberty and now. I’ve never attempted suicide, nor have I ever planned any sort of elaborate plans. It typically goes something like this… “Hrmm, I’d probably be happier/better off dead. The world would be better without you” which is quickly followed by “You’re a god damned fucking idiot.”  So, I just sat on the floor, crying….

“He who makes a beast of himself gets rid of the pain of being a man.” — Dr. Johnson

Depression and everything else aside, I continue to push forward with my transition. I sent in my check for the deposit on my surgery with Dr. Marci Bowers. This should occur sometime summer or fall of 2016. We are hoping to get a summer date, so Megan can go with me to California for the procedure. It’s about a three and a half hour surgery, which will have me in the bay area for about 2 weeks. The recovery is something like 6-8 weeks beyond that. Having never had major surgery before, it’s kinda scary to think about. It’s also kinda weird to consider the changes… but something I’ve been researching and thinking about for over 20 years now.

I also changed providers for laser hair removal. My previous place wasn’t actually laser, but IPL which is short for “Intense Pulsed Light”. It’s supposed to work all the same, but it also assumes that the vendor is on the up and up and aren’t playing games with the power output in order to sell you more sessions. I came in so cheap on the initial place that I think I should have known better.  The new place is 10 times the cost, but they guarantee success and give a 2 year warranty on hair not growing back. I start Wednesday. They said a 20% reduction is typical within 2 weeks of the first treatment. We’ll see. I would love to not have to shave my face every day. If I could get away from that, I could probably go without makeup more often.

I guess there’s more to say, but it’s late and tomorrow is my first day back to work since Hunter was born. More later.

Here in the last couple weeks, I’ve lost some of my excitement and joy from my newfound gender freedom. My facial hair has been probably been one of the biggest things that keeps me looking male. The laser isn’t working as well as I had hoped. I am still shaving daily, I still have an undeniable shadow, even clean shaved. I can’t cover that without a lot of makeup. Sometimes, I can’t put the makeup on, because my face is so irritated from shaving.

However, I’ve taken to not caring. Or at least pretending to not care. Being brave? I’ve just started going out without makeup, but decidedly in fem. Do I need to put on a face full of makeup to be a woman? I get some odd glances. Oddly, when I dress more andro, I get stranger looks. Capris and a T-shirt garners a lot of attention. Dress or a skirt, not quite as much.

I’ve been kind of hiding my transition from my neighbors. I don’t know why. I feel like I glance out the door and assuming the coast is clear, I rush to my truck and off I go. However tonight, I went to mow the grass and I was wearing a t-shirt over a cami. It’s getting hot, so I took the t-shirt off. I think this is the first time the neighbors have seen the boobs. If they didn’t know, they do now.

Why hide it? It’s not going to go away. I might as well be proud to be honest to myself. I can go out in public and be visably trans. It doesn’t bother me. My only qualm with this approach is restroom access. If I’m being read as male, even when I’m dressed as a woman, I don’t feel comfortable using either restroom.

In any event, I’m trying to make the best of an awkward situation. I guess I will write more on this later.